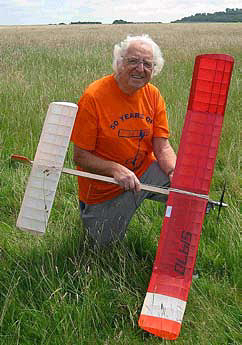 George Fuller died from cancer on December 30, 2012. He was a good friend to countless people around the world. You couldn’t meet George without immediately becoming his friend—and a firm and lasting friend. He will be remembered by aeromodellers as the designer of such iconic power models as the Stomper (1952), the Zoot Suit (1953) and the incomparable Dixielander (1954-6) — NFFS model of the year in 1972.

The Dixielander was kitted by Yeoman in 1959 and has been built by the thousands ever since. A stunning variant of the Dixielander was George’s ‘E’ type Dixielander of 1965. The wing was extended by adding a centre panel, it had VIT and the power was an ETA 29—it was spectacular! George said that the ‘E’ stood for extended, but everyone knew that it was a reference to the E type Jaguar, in those days everything that pushed the envelope referred back to that iconic sports car.

George was born on December 2, 1929, in Islington, a North London suburb. In his words, “I have always been fascinated by aircraft. I can remember, as a boy, whenever an aircraft flew over, I would look up and shout ‘Hello, Amy Johnson’, who was the hero of the day. I used to make mock-ups of aircraft out of orange boxes, sit in them, and act like a pilot.” As a very small boy he found cardboard ‘chuck gliders’ at the local newspaper shop, and with typical ‘Georgeness’ immediately began to cut and twist and modify them to make them fly better, learning the rudiments of trimming techniques very early. By eight years old he had seen a balsa and tissue model in a shop window and he was hooked. His first attempts, of course, were failures but he continued undeterred in his quest to build a flying model. His family’s house was bombed in WWII and they moved to St. Albans—a town just to the Northeast of London, and model Free Flight www.freeflight.org flying was pretty much in abeyance due to lack of materials, etc. After the war things picked up, and George was instrumental in re-starting the St. Albans Model Aero Club, a famous incubator for many modellers of distinction. Besides being a great modeller, George was also a jazz fan all his life; the names of his models attest to that.

In 1947 George attended the first British Nationals, and in 1997 he won the Slow Open Power event there (Classic Power to North Americans), flying a modified Dixielander. Two years earlier he won the Open Power event at the British Nats—a win that had eluded him previously despite his illustrious career—and many wins in other power classes. This was 26 years after his son Chris won that event, which George said was “a happy moment in my life”. In the same year he was declared Nationals Power Champion. He flew his ‘Zoot Suit’ to second place in the 1953 World Championships, being edged out of first by Dave Kneeland of the USA. In 1966 he competed in the U.S. Nationals, held at Glenview, Chicago. He came third after the naval timekeeper lost sight of his Dixielander very high in the clouds on its first official flight—clocking it at 3:52 when maxes were 5 minutes.

In 1993 George competed in the World Championships in California. Upon arriving at Los Angleles he got separated from the rest of the team because his model box was late getting off the aircraft. Undeterred, he rented a car, telling the others that he would catch up with them, however, he didn’t know how to get to the motel they were staying at. The intrepid George had almost never driven on the ‘wrong’ (that is the right hand) side of the road either, but out he went, into the darkness and the L.A. freeway system. Once on to the freeway he was petrified by the volume and speed of the traffic and, unable to confidently manoeuvre, he just kept going with the flow until he reached the outer regions of the city. Once the traffic thinned a little he decided that he had better exit and try to get his bearings—he did so at the next exit and there in front of him was the motel he was destined for. Unfortunately, on that trip he contracted ‘Valley Fever’ (Coccidioidomycosis) which, upon his return to the UK made him an object of real curiosity to the medical profession, most of whom had never seen or heard of such a condition.

While I have built many examples of George’s designs over the last 54 years (particularly the ‘Dixie’), and grew up in North London myself, I came to Canada in 1965, having never met him. That was rectified only a few years ago at Middle Wallop in an event commemorating the fiftieth anniversary of the kitting of the Dixielander. Despite meeting him so recently, there was an instant rapport, and it feels as though we have been friends for always. I know that everyone who knew him feels the same. I had planned to see him again this summer on a trip to the UK, sadly, now that won’t happen. We have lost one of the very best. Goodbye old friend, and thank you for your friendship, and for the many hours of pleasure you have given and continue to give me. My condolences to his wife Kathy, his children, Christopher and Christina, and his stepsons Duncan and Ian.