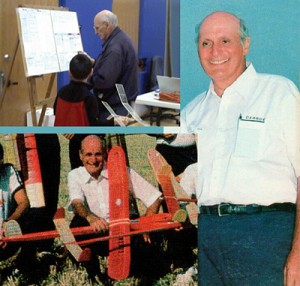 Born in Detroit in 1928, George Xenakis passed away on November 1, 2008. George married Peggy, his wife of fifty years, in 1958. Their children are Greg, Bill, and Suzanne. They have five grandchildren — Michael, Tim, Jessie, Hannah and David.

George was an aerospace engineer and worked on the Apollo Program. He had a long career in aeronautical and space science working for the military, NASA and Lockheed.

His great love was aero-modeling. He began building free flight models with 10 cent kits when he was 11 and became a member of the Detroit Balsa Bugs at 13. George had a lifelong passion for sharing his knowledge and the joys of aeronautics with youth.  He designed a number of easy-build-and-fly indoor and outdoor models for kids, and organized many build-and-fly competitions for kids.  He never tiredof helping with building, giving advice on flight adjustments, winding rubber motors, celebrating successful flights, and handing out trophies and prizes.

During his time at Moffett Field Ames Research Center, George gained access to the massive Hangar One, and spearheaded the Youth Interactive Aeronautics Program.  Enlisting help from Oakland Cloud Duster members, family and friends, he held kids’ contests there for several years.  His vision for this project created a singularly unique experience that influenced many young lives, including those of his children and grandchildren.

His contributions to model aircraft and especially to Free Flight are many. George dabbled in RC modeling, but was really a Free Flight purist. His greatest focus was Wakefield, and he competed on several US FAI F1B World Championship teams.  He made the first recording thermal detector, pioneered in-flight adjustable surfaces, wrote many technical papers that are often referenced in technical articles, and also represented the national Academy of Model Aeronautics for free flight at the international model aeronautics governing body.

George was inducted into the NFFS Hall of Fame in 1995, and remained active in the Free Flight community and in youth programs for the next decade.

He made the world a better place, especially for aero-modelers, young and old. George is fondly remembered, loved, and missed.