This is from correspondence between Joe Mekina and a local reporter in Ohio.

I am sending these pictures at the request of Mark Schaefer, whose son Doug lives in Lewisburg, OH and has been in contact with you since you write for the local section of the Dayton Daily News for that area.

I see from Mark’s email correspondence with you, that Mark has already told you his son Doug is part of three man Junior team that will be representing the USA in the upcoming F1D World Championships held in a salt mine in Romania. I can only add to that and say it is quite an honor for Doug to have competed and qualified to do so. Doug earned that right as the top placing Junior at the F1D Team Selection finals held last year in the Goodyear Blimp hangar in Akron, OH. Doug’s flight times in that event were over 29 minutes, well done Doug! 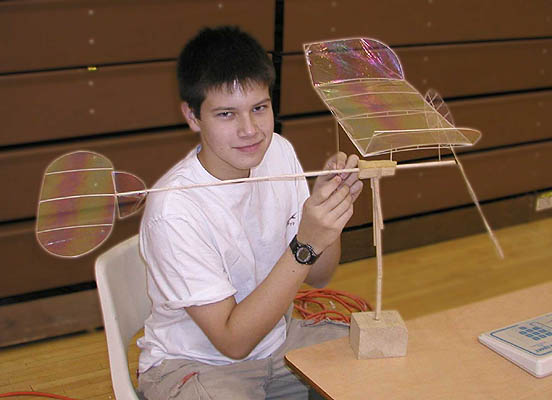 I have known Mark and his son Doug pretty much from his beginnings in this hobby and followed his progress as he rose to the top of his class. Doug is not only a fine competitor but also a team player and has shared his knowledge and experiences with others including his fellow competitors both young and old. For this too, I am proud of him. 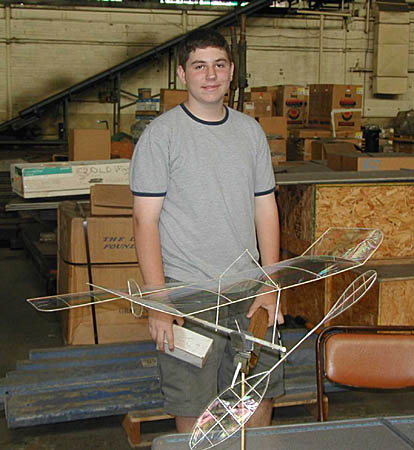 Along those lines, I want to offer some other interesting facts about this years Junior F1D team that may be of further use to you in your article:

First the Junior F1D team is an all Ohio team, as his team members are Ben Saks from Cleveland and Mathew Chalker from Centerville. 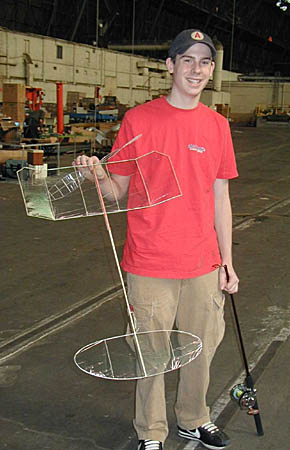 Second, Ohio is the home of the reigning Senior (adult) class F1D champion, John Kagan (also from the Cleveland area). John will also travel back to Romania to defend his individual title as World F1D Champion. The three Senior (adult) team members are from Indiana, and California.

Third, all three of these boys had their roots in school sponsored Science Olympiad competitions, where they began by flying less delicate airplanes in the “Wright Stuff” event. Here they had to fly models weighing a minimum of 10 grams with a maximum of 2 grams of rubber. Flight times with these models often were only in the 2-3 minute range. As they progressed and began building F1D models which need only weigh a minimum of 1.2 grams and fly with a maximum of 0.6 grams of rubber. Their respective flight times progressed to the 30 minute level! What excitement these kids must have experienced seeing their hand made creations fly for over a half an hour with a simple rubber powered motor! One thing for certain is they are not afraid of the intricate technologies used to build these micro light rubber band flying machines! They have incorporated many technological features in there F1D models that contribute much to there outstanding success in competitions. Basically -our kids are smart, and have applied themselves, doing what they needed to do to excel in their event. There reward is not to travel to Romania to represent the USA in the World Championships! Again, quite an honor for some school kids flying rubber band model airplanes!

Lynn, there is truly lots to write about here, and I’d be happy to point you to sources of more information and supply pictures, etc. if you wish. I see from the email trail that Mark intends on contacting you upon there return, great! You may also want to do a follow on article or two, perhaps at a local event where you may wish to observe these planes personally?

One of the reasons that our Ohio kids have faired so well in national competition is that there are two groups, one in the Dayton area and one in the Cleveland area that have provided the opportunity for these kids to fly and mentored them in their beginnings. Not only are these 3 kids flying, but also many others in these two groups who also build and fly these types of models whom I am sure will be watching these 3 as they compete at eh World Champs. I know also any publicity that you give them will also go along way in making there modeling experience complete and a memorable experience for all the kids involved!

So, in light of the above discussion, I have also included 2 other photographs of the other 2 Junior team members in addition to the one of Doug. They are all high resolution digital pictures that should print exceptionally well. Again, the other Junior F1D members are Mathew Chalker from Centerville, OH and Ben Saks from Cleveland, OH. The picture are labeled appropriately. These pictures have already been published in the model aircraft circles, and posted in low resolution on the Internet. I also know these two other young men personally as well as there parents. I say all this in case you may be concerned about using there pictures and / or names without their permission etc… I am most certain that there would be no issues here in those regards, so feel free to use there names and pictures if you wish.

I also want to personally thank you for publicizing these types of stories, it is good reading for your readers, upbeat, and downright interesting! It is always good to read something positive about our youth!

If there is anything more I can do to facilitate your article or perhaps invite you to a local event
in the future for a photo / interview session let me know, I’d be happy to help you.

If possible, could you blip me a quick email when it is printed so I can pursue getting a Dayton Daily paper from the Northeast area where I understand you plan on running this article in the local section? I’d appreciate it.

I look forward to reading your article on this subject!