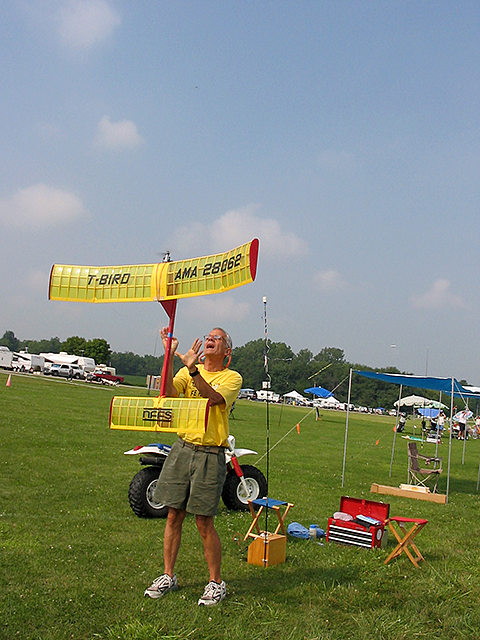 Steve Bruno and his T-Bird

Nostalgia power was established as the first nostalgia free flight program sponsored by the NFFS and includes approved model designs of the 1943-1956 period, powered by original engines of the era plus selected post-Nostalgia engines. See the NFFS Rule Book (2022-2023) regarding rules for Nostalgia Power. The recently updated Nostalgia Power Eligible Design List (2022-2023) is now available.

About 20 years ago, Ralph and Walt Prey led a movement to resurrect interest in flying models that originated in the post WW II-mid-’50s era. Their intent: establish a free-flight power discipline that would encourage flying these designs in an enjoyable, low-key environment. This early work has been augmented through yeoman efforts of Bob Larsh, who was primarily responsible for production of detailed lists of eligible Nostalgia model designs and engines. Harry Murphy was also instrumental in early efforts to promote Nostalgia.

Nostalgia rules call for using powerplants of that era, so you’ll see Nostalgia modelers dusting off engines such as the Holland Hornet, K&B Greenhead, OS Max and Johnson Combat Special.

Over the years, a set of rules has evolved that requires the builder to adhere to original planforms and construction details, while taking advantage of certain technical advances that have occurred since the Nostalgia era. Standard Nostalgia, by far the most popular event, is flown under the 100-oz power loading rule (1 oz model weight for each 0.01 cubic-in. of engine displacement). Most commonly hand launched, these models also use the VTO of Nostalgia era when flying with the longer Cat. I or Cat. II engine runs on larger flying sites. Other Nostalgia categories include Early 1/2A, PAA-Load, Ignition and ROW.

There are more than 800 approved designs from the Nostalgia era. Everything from Sal Taibi’s Spacer to Jay Jackson’s Top Banana; Lou Mahieu’s Zeek to Ron St. Jean’s Ramrod; T-Bird to Y-Bar.

Join the Nostalgia movement! Download a copy of the NFFS Rule Book (2022-2023) and a Nostalgia Power Eligible Design List (2022-2023). The rulebook details all you need to know about Nostalgia rules, eligible engines and construction techniques. The design list provides some particulars of each model design, including wingspan, designers, and sources for plans. Check out the plans available from the NFFS shop. 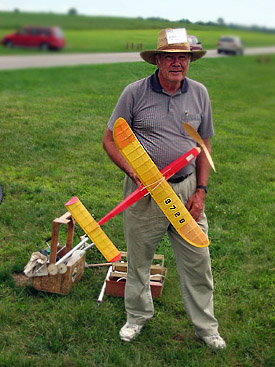 Jim O’Reilly and his Wanderer

The Nostalgia era of 1943-1956 included many highly competitive designs that may now be flown in official NFFS events. The wealth of available designs should result in high contest performances, perhaps even challenging that of current AMA-type modern models.
A list of suggested models and sources for related articles and plans (updated 10-23-21) is available here. See the NFFS Rule Book (2022-2023) regarding rules for Nostalgia Rubber.

These lists of glider plans are provided for information only and are not part of any officially sanctioned NFFS events.