Sound the Bunt
From: Michael Achterberg

Bunt or sound!
The bunt is easier because you can’t always hear the motor stop. But if no bunt, which sometime happens then what?   Simply fix, but no one likes, is 4 sec motor run preset on the ground and verified by timer with electronic timer. I think most of the flyers have or are going to an electronic timer anyway.  This fixes the problem and relieves the timer of this difficult call. Yes, the power flyers pick up .3 to .5 seconds in motor run from sound delay, but this allows them to get as high as a glider or rubber model. Hehehehe. Seems fair and makes all groups about the same.   Since the requirement of stopping engine before RDT, the use of electronic timer is really the only way to do this, so give the flyers a little bonus of a couple tenths of a second to encourage the change over.
Its a win win.
Thermals,
Michael Achterberg

Sitting with a group of dodgy UK fliers at Poitou. We are trying to plan for next Feb at Lost Hills and wondered what the dates are. Do you have dates yet please?
Airfares currently very cheap, hence our interest in early booking.
Thanks
John Cooper

Dudes as we say …

That is provided all the NAC’s involved AMA, MFNZ, MAAC plus NFFS, CIAM, FAI all have their stars aligned

F1C at Szentes
The editor was asked to add some comments about F1C at the World Champs.  Not really the right person here are a few observations. Ones from a real C Flyer always welcome…

Good entry of 79 people flying from 30 countries. This puts paid to the suggestion from some that F1Q could be flown on the same day as this would require, for example another 30 poles assuming the same level of participation

It is not a one supplier event with Sychov showing his models were contender as well as Babenko.

In the USA most fixed wing (i.e. not flapper or folder) have given up at this event there were quite a number taking part.

Verbitsky was there as a spectator with his son. He was entered in the Budapest Cup but wisely decided not to fly.

As a F1B participant, my personal opinion about 2017 Budapest FF World Cup and 2017 FF WC

First of all, I congratulate all of the winners. Their victory which was achieved by them in very difficult conditions is very valuable.

Closing date for applications was too early (June 1, 2017). After this date, the organizer started to accept the applications with penalty (Entry fee became 50-Euro). This was not fair.

It was a big mistake to organize the whole contest in one day. There were more than 200 competitors on the field. This increased risk of dangerous accidents. In addition, there were 6 fliers in each pole. For this reason, the round durations were 90 minutes. There was one-hour lunch break. After 11:00 o’clock the weather was very hot and dangerous for us. Probably, to reduce the cost and to make it easier, organizer thought to finish everything in one day.

In a windy weather, organizer announced the flying time for the first round as 5 minutes. For most of us, it was the first fly on this field. Many models were on the trees, channel and bog. Some of them were broken. This was a cruel decision.

What was the purpose of organizing a huge competition in one day and in a windy weather opening the first round with 5 minutes max? Maybe killing the people and the models!!!

Registration and processing
It was again in the same hotel as opening ceremony. Why it was not in school in Szentes? Giving a plastic ring to carry on the hand for the whole duration of the championships was crazy idea. May be it was because printing badge with photo requires some effort and cost. Probably, giving a plastic ring was the cheapest and easiest way. But it was useless, terrible and unrespectable.

The gift was the cheapest and the simplest one given so far. There was not any characteristic of it for our memories.

Contest schedule
Contest days were starting from Wednesday. There was not a regular reserve day. As you know, Friday should be reserve day and Saturday should be used for emergency cases. As a matter of fact, Saturday weather was not good to open a round. If the Friday was like Saturday, F1A contest could not be done!!!

Field
Field was not good enough to carry on a World Championships. Furthermore, the organizer used it in the worst way. Organizer set the center of the contest (parking, buffet, organization cottages, starting line, etc.) to the 2900 meters north of the main entrance of the field. Just behind of this location, there were high trees and some old barracks. Starting line was just 250 meters in front of the trees. From the starting line, north and north-west directions were not so visible. It was very obvious to lose the models behind the trees and stop time keeping. Organizer tried to use a fixed start line; he did not consider the wind direction. All three days, generally, the wind was from south and south east directions through the trees.

Depending upon the wind direction, organizer should be ready to start the round from at least three different starting places.

F1B Day
All the weather forecast sites was showing the wind direction from SSE (south, south-east) which was the direction from starting line directly to the trees, buffet and parking place. I went to the field about 05:45 am. The wind speed was about 3-5 m/s and the forecasted direction was correct. Starting line was very close to the high trees, buffet, car parking, and some very old barracks (about 250 meters). Organizer did not take any action against this situation.

First official round of the contest was opened at 07:00 am. The wind was 5-7 m/s and the direction was through trees. Max time was 4 minutes. Unfortunately, jury only watched this catastrophic situation.

Including me, some people started at the beginning of the round. I did a very clear max. I retrieved the model from almost 2.0 km. far from the starting line.

While I was returning, I heard the announcement of fully cancellation of the round. The jury said the round was totally cancelled and all the fliers would fly again. I disappointed very badly and for me, this catastrophic, crazy, unfair, unacceptable decision was the end of the contest.

I participated in many competitions and I have never seen such a wrong decision. The jury may be given the right of cancellation but in any case it was unfair.

Starting line was moved 400 m. down to south direction afterwards. The new max time was set to 3 minutes and the first round was re-opened at 08:50

I wanted that situation to be recorded in the Jury WCh report. I summarized the incident on a paper and with 50-Euro, I tried to give it to Jury. Jury did not accept and sent me to the contest director. But the contest director was not visible on the field. Around the start line, I did not see him until the end of fifth round. Unfortunately, there was not a contest director from the first round to the fifth round. I don’t know if he was around in the fly-off rounds.

In the second round, Jury member Mr. Wilhelm Kamp was at my pole and waiting me with a chronometer. Why? Was the time keepers not good enough!!! For me, the reason was my attempt to give a protest for the cancellation of the first round results. Clearly, he applied a psychological pressure on me.

In my opinion, F1B day was a total catastrophe and scandal.

Conclusion
There were bad field, hot and windy weather, penalties, threats, prohibitions, catastrophic mistakes and decisions, but there was no respect to participants.

One big contest was killed by the organizer, contest director and jury all together. 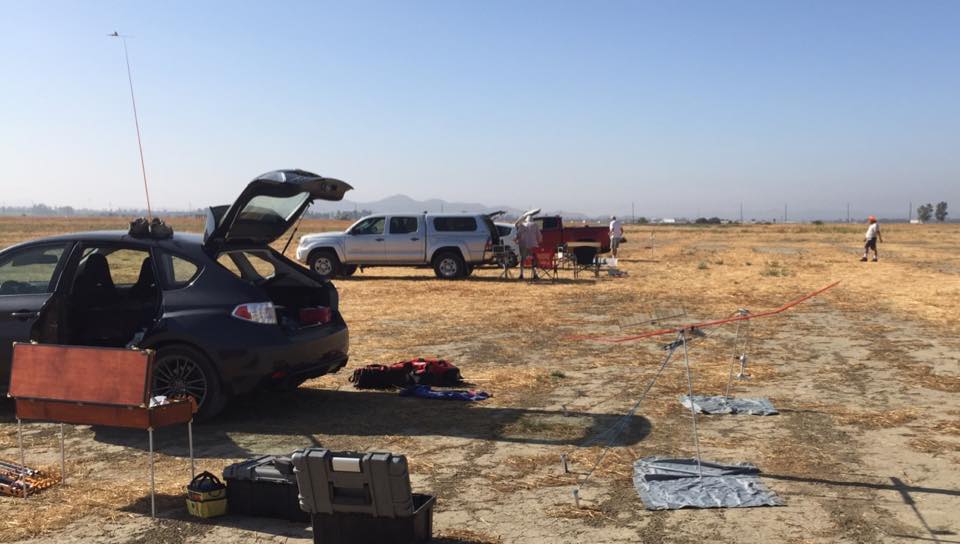 Like many sportsmen the SEN editor is back home and seen here, well at least his model is test flying at a local field (no water in our canal, no swamp, no wind and no trees). His F1B buddies had other family obligations this weekend but a number of others showed up: Stan Buddenbohn, Clint Brooks, Mike Pykelny and Lee Hines (known to some as the Leeper).  Of course they asked me about the World Champs. Upon reflection I said that in spite of the organizational issues, the 40 C temp, the wind blowing the wrong way and messing up the 5th round flight I had a great time.  Perhaps because as the “Boy with crazy grand parents” observed to his parents, Roger has a lot of nice and interesting friends.

Reminder that SEN is focused on FAI Model flying and does not include comments of a general political nature.