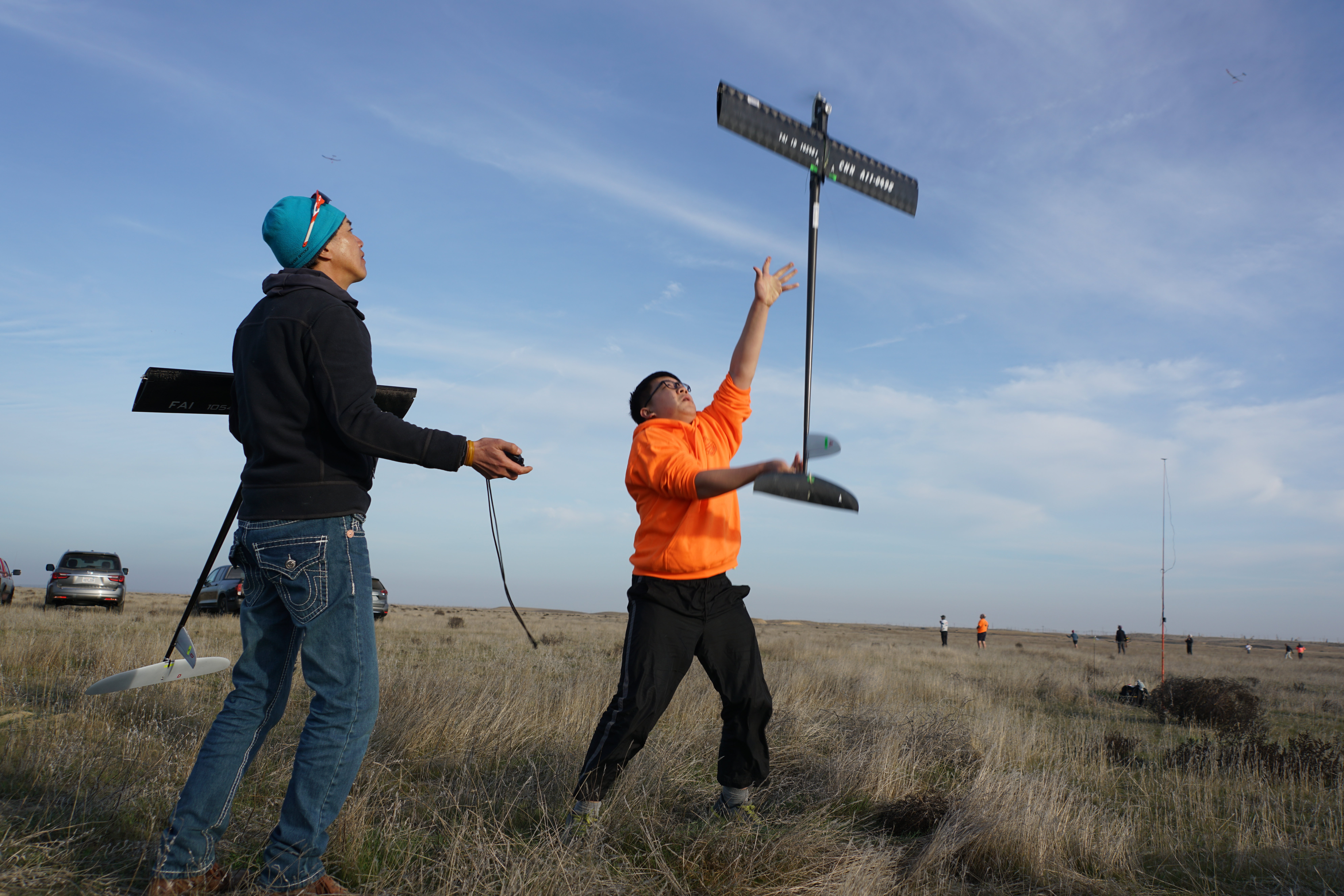 This year 19 Chinese flyers took part in the Fab Feb contests at Lost Hills. This group included 8 junior flyers ad were accompanied by some parents and coaches.  During the meeting one of the parents spoke to me and said that some of the juniors flyers would write about their model flying trip to the USA for us in English.  This was written by Zizhe Yin who flew F1C in the events.  This young man had not had much experience flying a F1C model and none in flying in major competition of this size. In addition this was a long way from his homeland and run in a language that was foreign to him. Most of his previous competition flying had been in flying R/C models.  What is very interesting is that he talks about learning all the aspects of flying a free flight model and something as complex as a F1C model.  Zizhe Yin and his teammates did very well flying at Lost Hills, the weather was good but especially challenging at times for people who had never been to Lost Hills before.  They clearly had great time and learnt a lot. Just writing the article for us must have been difficult.  Just think how you would have got on writing something in foreign language when you were a teenager.  We are hoping that the dates of our Fab Feb event continues to coincide with the Chinese New Year holiday period so these visitors from China will always  come and fly with us.

I am Zizhe Yin from China, Beijing and I am 16 years old. I have flown model airplanes for over eight years since elementary school. I used to fly RC models and it is my first year participating the Free Flight events. I am in contact of a local model club in Beijing and I am trying my best to keep flying every year.

As one of the China team members, it is my first time attending international free flight competitions, the three contests which were together called the Fabulous February events- the Kiwi & Issacson cup, the North American cup and the Bob White Maxmen International Cup had gave me unforgettable experiences and made me matured a lot.

This time I am using a modern F1C model which has foldable wings and a 2.5cc engine with about 30k RPM rotational speed. It had not been a long time since I got to know F1C, even though I was bit familiar with F1 contests, I had not dealt with real models. Before participating the contests in America, I went to a flight field in JiangXi province to practice the basic skills including preparation, posture, maintenance etc. Not until I got to Lost Hills Flight field had I realized I had only three complete flights, and it was a tough job for me as there were two days before the Kiwi Cup begin.

All I can do in those two days was to adjust the models and my mood. The engine needed some modification and so did the wings, rudder, tailplane stuff. During Feb 8th and 9th I had my skills in F1C enhanced a bit, I learned how to keep track of the model’s flying and landing position by using a binocular. I have learned the importance to be familiarize with using a binocular since someone in the contest was not able to track the model and it took them half a day or more to find the model.

At February 10th I arrived the flight field with my coach early in the morning to do some preparations. The largest difference I found between a free flight contest and the P3A contest ( which is a F3A-type event designated for junior flyers in China) is that all I have to do in a P3A contest is to be there and complete two flights which takes no more than ten minutes, but in a free flight contest I have to stay concentrate for five to seven hours in order to finish the whole contest if I do not want to leave a big DNF on the scoreboard.

For each round in the first event, I have to hang the cables, add fuel and lead them into the engine few minutes before the round begin and wait for the opening of the window to be announced. Meanwhile I did not have a wind speed sensor, I was under my coach’s indications to start the engine and launch the model. Whenever he told me to go, I have to start the engine as fast as possible and launch it. Thanks for the efforts I made on the previous practices, I was able to start the engine in a couple seconds. When the model landed in the third round, its tail tube broke. I was under great anxiety even though my coach told me it is sometimes common to land on tough grounds and there are millions of uncertainties.

Things were getting worse in the remaining rounds. As the contest director announces twice to make the fifth round delayed up to 90 minutes due to unexpected winds, the flight duration was also reduced to 120 seconds. I had a utterly failure in the launching process, in which the plane completed a loop few seconds after it sprints into the sky. What gratified me was that the model successfully hit 120 seconds even though it’s initial altitude was only about thirty to forty meters.

I had two days’ leisure and model-adjusting time for the next contest in which I had a bit modification on the rudder, but no matter how I tried to adjust, similar nervous feeling emerged in the North American Cup. In the third round on February 16th, I had a negligence in checking the cables and there was a error happened where the dethermalizer was not connected to the tailplane. It seemed like a sudden stream of sadness emerged in my mind because I saw the model performed a beautiful arc and ‘kissed’ the ground within three seconds, when the motor was still working. I was extremely frightened meanwhile I had my second model ready and finished the three remaining rounds. Nothing was needed to complain about that because that was my own fault. Therefore, the cost of hundreds of dollars had made me learned the lesson. Fortunately, I did not had the whole model damaged.

When it was the time for the third contest, I just want to say that one would better not change the whole pattern in doing something into another one unless he have been already proficient in another one. I used to use my forefinger to push the switch, while I accidentally wanted to use my forefinger. Even though I thought that it could bring me some comfort, I was completely wrong. My arm was suffering and the model was launched deviating at least 30 degrees from the perpendicular line. It was still acceptable in the first two rounds but matters got worse in the fourth round. The altitude of the model was so low that even though there were upflows everywhere it was still blocked by the wall of one hundred seconds. There upon I once had a thought to stick pieces of abrasive paper on the tube where I was holding it yet it was fruitless efforts. I had no choice but to still use me forefinger, it looks likes kind of joke isn’t it ? My legs were shaking drastically whenever the model was not climbing straightly, and every time I cannot chase the air currents when everybody else was launching their models to the sky due not being able to start the engine on time. When I saw the model was performing greatly there was no reason not to feel relieved. Although I entered the contest anxiously I was able to finish it feeling relaxed, which I think is my biggest breakthrough.

Only experienced participating all the seven regular rounds had I realized that the contest had only begin from the fly-offs. As I had been volunteered as a timer for the Maxmen F1A event fly-offs, it was virtually thrilling and exciting to see so many flyers having their models launched super high, even some planes glided for over ten minutes though the required flight duration was only eight minutes and those planes had got into the mountains which I am sure that’s at least a kilometer from the starting line. Plus I have admiration for those participants who had been timing for many rounds.

These few days had been shocking. In spite of being exhausted, I was enriched by delightfulness. Only when I had my mentality well adjust had I been able to get to know the real joy in free flight.. When I can prepare and execute the flight by the efforts that I made myself, seeing my plane gliding for over six or eight minutes or even after a insane climbing(never mind my plane had only climbed up to 130 meters in which those world champs always do 150s ), seeing those fascinating circling, the accurate radius due to a series of modification on the rudder, the encounter in the upward air currents when the plane does not looks to land in ten minutes time, so far as to the other’s praises, I can hardly tell which one is repulsive to me. Even if I did not have all the max flight time accomplished and cannot get into the flyoffs, it was still a kind of feeling that I can never get to know without entering those contests. From now on my love in free flight had just been cultivated, and I think it can fit existing with my love in radio-controls. Therefore, the Fabulous February is just a start.