Why altimeters – Here’s why
From:Allard van Wallene
On altimeteres, a final answer to Pierre’s questions:

The apparently contradictory rule as to ‘disappearing from time keeper’s sight’ is exactly the reason why the altimeter’s rule was introduced. This was discussed at great lengths within the CIAM technical subcommittee and even used as an argument to introduce the altimeter rule. Therefore it was concluded that the altimeter rule takes precedence. In this sense, a model disappearing behind a row of trees or poor timekeeper’s eyesight / binoculars have equal effect. It is the performance of the model from start to ground which counts.

As to commercial availability, this is up to the contestant to find out well before participating in a contest, not to ask a jury at the champs. So are these toys available on a commercial basis? They certainly are. Just use Google or ask (via the great SEN medium) well before the champs. For the sportsman who apparently failed this task, here is a link: https://hobbyking.com/en_us/hobbykingr-tm-altimeter.html

This weekend featured two Europe Cup competitions, The Bardarov Memorial on Saturday, and the Bulgaria Cup on Sunday. The actual Junior World Champs program doesn’t start until Monday with the processing of models and the Introductory ceremonies.  Tuesday is F1A day, Wednesday is F1B day and F1P will fly Thursday. Things wrap up on Friday with prize giving and the banquet. So, before I get into the details of the flying, I wanted to correct a couple of statements made in my first article. Due to a punctuation error, it might have appeared that Jim Parker (team manager) and Sevak Malkasyan (assistant T.M.) were not at Pazardzhik. Not true! Only Adelaide and her parents were held up due to a missing box of models. Secondly, the population of Pazardzhik is just over 70,000–larger than my estimate.
A few other notes of interest about this country.

Bulgaria is a country of just over 7 million people. If it were a state in the USA, it would rank number 14 just between Washington and Arizona. In total area it is 42,885 sq. miles. If it were a state in the USA, it would rank number 35 in size, just ahead of Virginia. and behind Ohio. Although a member of the EU, it has its own currency–the Lev–which has a value of about 60 cents US. Bulgaria is positioned in both the northern and eastern hemispheres and is located in the southeastern region of the European Continent on the edge of the Black Sea. Bulgaria is bordered by the countries of Greece, Macedonia, Romania, Serbia, and Turkey, as well as the Black Sea. In the Pazardzhik region, much land is set aside for growing crops: sunflowers, roses, various row crops. The flying field has gourds, melons, tomatoes, corn and sunflowers nearby. The flying field, as noted earlier, was a Luftwaffe airfield in WWII, and was tiled throughout, so drainage is excellent. It’s just over 10 miles from the city, and the surrounding countryside is very rural and dotted with decrepit structures, many leftover from Soviet times.

Now, to the contest itself. Saturday’s competition drew contestants from throughout Europe and was open to all. Joel Yori and Roman Stalick entered the f!A competition, as did Jim Parker. Andrew Barron, who now lives in Croatia during summers with hs new bride Lidja, also joined in. Kyle Gerspacher entered F1B, and Bob Sifleet entered F1Q electric. All the F1a fliers maxed the first round, which had a 5 minute flight and all went on the record 5 perfect scores and qualify for the flyoffs, which were set to begin at 6:30 pm. Of the 58 contestants entered, 20 qualified for the flyoffs. The flyoff max was set at 6 minutes. Joel made the flight as did Jim, but Roman dropped. Roman was flying his number two glider, as his number one suffered some damage in round 4, and had to be retired until repairs were done. Joel and Jim continued flying, and the final round ended after dark. When all was said ad done, Joel placed tenth overall (third place Junior), Roan paced 18th overall (6t place Junior) and Jim placed seventh. Andrew Barron placed 36th.

Kyle was our only F1B entry, and he acquitted himself very well, maxing out and getting to the flyoff round. F1B only needed one 6 minute flyoff to settle the score. Kyle won it all with a 5:54. He won Top Junior and Top Score. Now he and dad, David, have to get those trophies home somehow. Kyle was very composed and businesslike throughout out the day, and it paid off for him Great flying!

Bob Sifleet was flying along with the rest of the guys, but his event was F1Q electric. He placed second.
Trophies were not presented until late in the afternoon on Sunday.
Sunday’s competition for the Bulgaria Cup began at 7:30 am just as it had the day before. Winds were from the South again until the second round began, then the wind shifted, and although it remained variable throughout the day again, it ended up generally coming from the North to Northwest the remainder of the day. The temperatures were a repeat, too, reaching the high 80’s. Models did drift off the field in the longer rounds, and frequent trips into the local cropland were not uncommon.

The US Juniors who entered were Hayden Ashworth in F1P and Adelaide Ulm in F1A. Bob Sifleet entered the F1Q event, and Andrew Barron was also flying F1A.

Hayden put in perfect flight after perfect flight ending his day with 5 maxes, and beating his competition without a flyoff. Adelaide was working on launches and getting used to the competition conditions. She didn’t complete her 5 flights, opting instead to fine tune her model and technique off to the side of the flightline. Bob Sifleet maxed out and took first in F1Q.

Flyoffs for the Sunday competition were set to begin at 7:30 pm, with trophy presentation set for 10 pm. All of the US contingent left the field in order to get back to the Hotel Trakia in Pazardzhik, clean up and have dinner. It’s been a long day.

Tomorrow (Monday) begins the Junior World Championships. I’m sure our team will do well. The youngsters are ready to go.  I’ll report on the  processing and the opening Cceremony in my next article. Check out  Facebook/Freeflight for pictures from the weekend’s action!

If you could put this picture out on SEN, I’d appreciate it.  These are the few items left in Lost and Found after Fab Feb.

The watch is a Q&Q Quartz with a leather band
The radio is an “Altico”(?) and looks like it had been out for quite a while
The Leatherman looks like it was out a while, but not bad
The purple item is a part of an “Arrow” tracking antenna
The white item looks like a nylon handled hook for an Andruikov front end 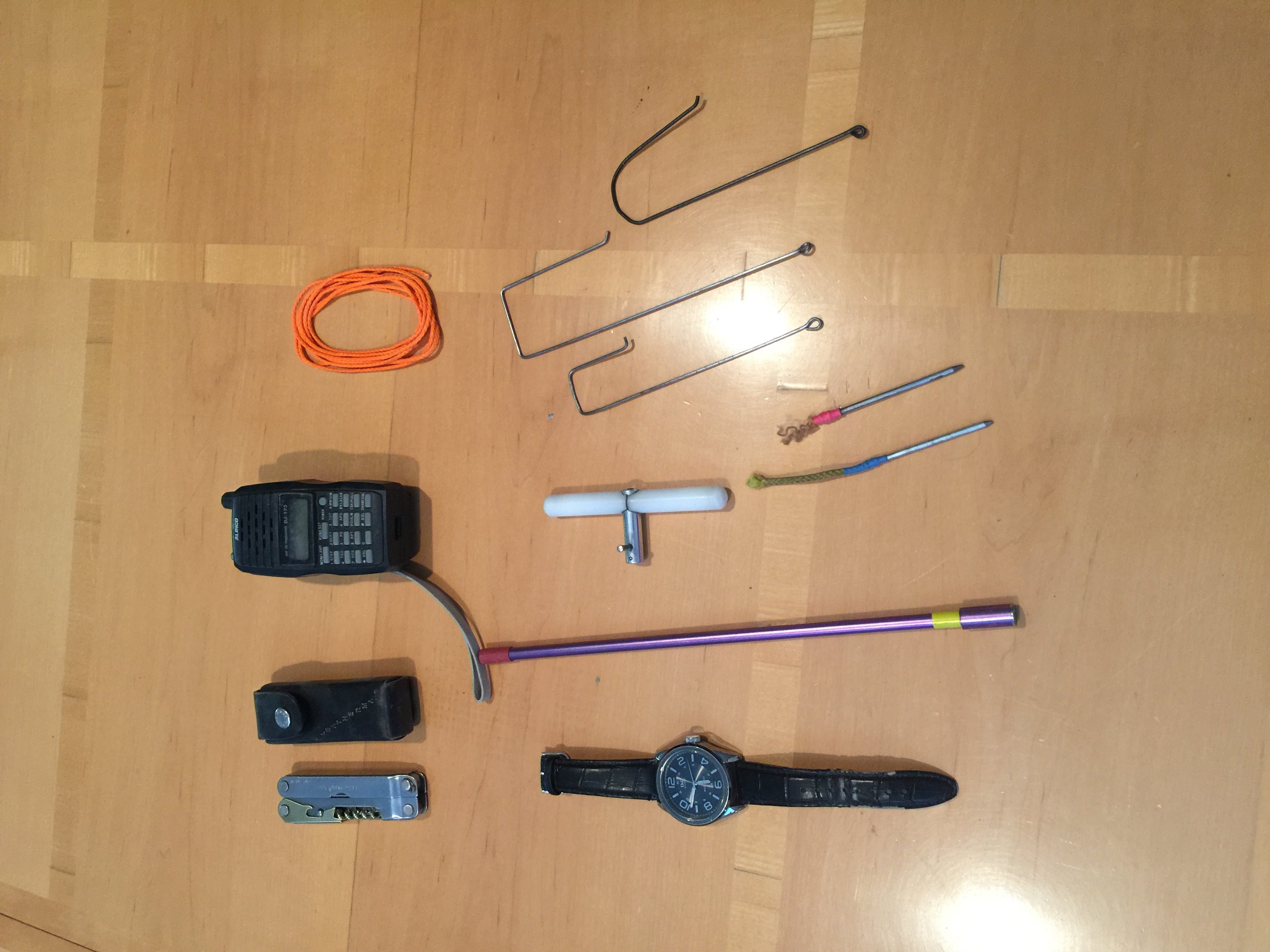 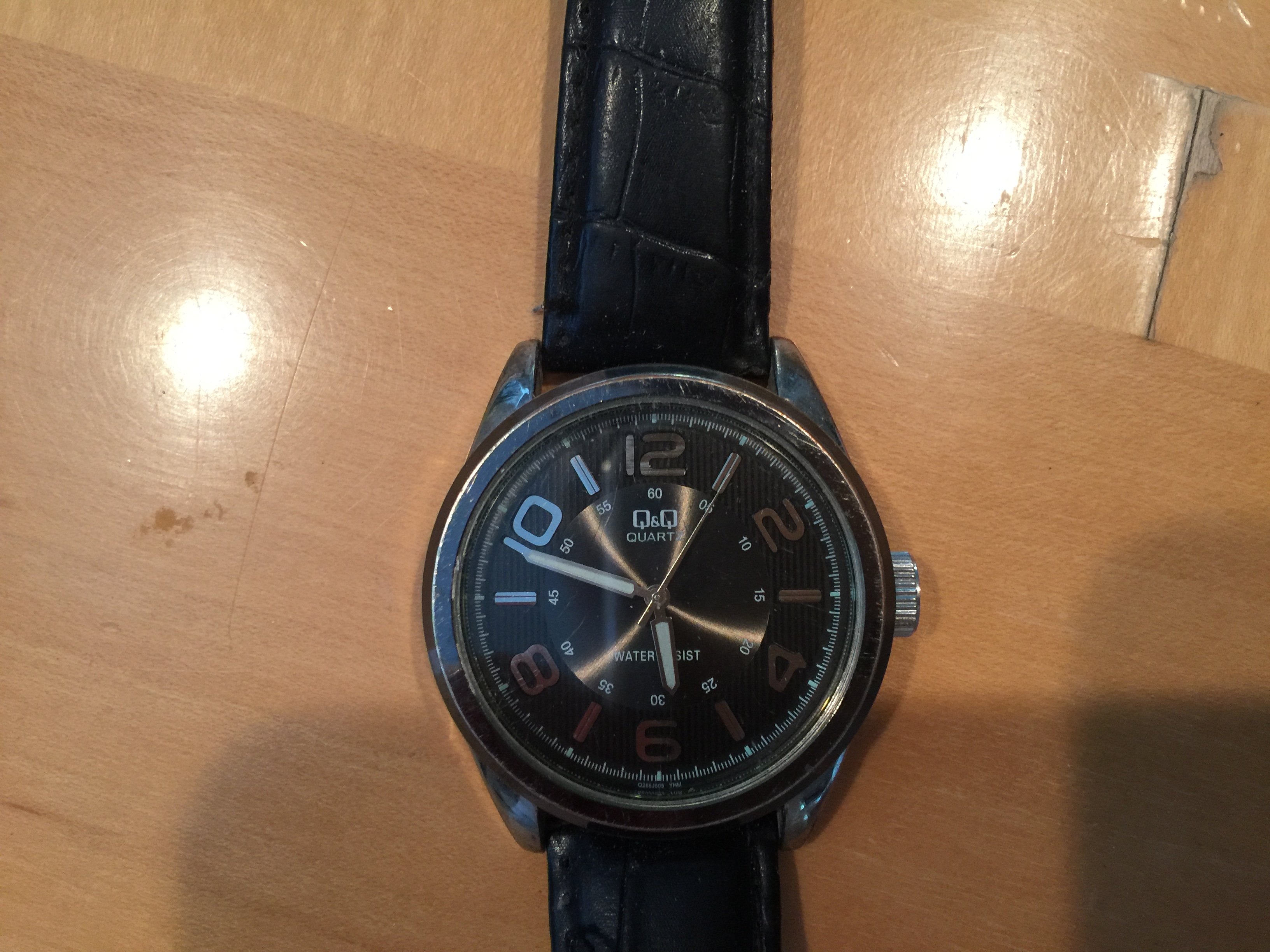