Free flight model airplanes follow the wind and soar in rising thermal currents of warm air. They set their own course and are free of any control from the ground. If you have ever tossed a folded paper airplane or a dime store balsa glider, you have flown a free flight model in its most basic form.

Free flight models are of two basic types: those that are flown indoors, and those that are flown outdoors. Indoor models are very light, slow flying models powered by twisted rubber strips driving a large propeller. Hand launched gliders and gliders catapulted into the air by a loop of rubber strip are also flown indoors. They are flown in school gymnasiums, auditoriums and similar large open spaces. Indoor models are one of the least expensive and simplest ways to get started in modeling, and suitable flying sites are available in most locations.

Outdoor models are typically larger and heavier than indoor models. Advanced types are capable of very high performance. Some have stayed in the air for nearly an hour in a single flight under ideal conditions. Others have been carried dozens of miles before coming back to earth. The most advanced types can glide for ten minutes or more after only 5 seconds of powered flight. In order to keep from losing them, most outdoor free flight models are equipped with timer operated devices to limit the amount of time the engine runs. Other timers operate devices that bring the model safely back to earth before it is carried away in a thermal.

Free flight modeling is a challenging and rewarding sport and hobby. Instead of being a handicap, the absence of control over the model during its flight is what gives free flight its challenge and appeal. Simple indoor and outdoor models can provide rewarding performance at low cost, and are relatively easy to build. Building and flying high performance models requires skill and experience, however. If the challenges are large, so are the rewards. To launch a model into a perfect climbing power pattern and then watch it circle and climb toward the clouds in a thermal is a thrill that keeps free flighters involved throughout a lifetime.

On the technique and beauty of F1A gliders.With Per Findahl, video by Oskar Findahl.

Free flight is both a sport and a hobby. As a hobby, it involves acquiring plans and materials, building the models, and installing the engine and hardware. As one becomes more skilled, creating one’s own designs is another possibility. A beginning modeler will learn building skills and knowledge of aeronautical terms and the basic science of flight. Model building also teaches patience, perseverance when things at first don’t go well, and problem solving skills. Acquiring and applying these skills provides a sense of achievement and mastery.

Flying models in competition is the sporting aspect of free flight. Indoor models fly slowly and silently, and seem to be suspended in mid air. Flying very light models indoors permits competition throughout the year, and is especially popular in winter. The object is to achieve the highest total flight time in a specified number of flights. Rules for different classes of models specify minimum weights and some dimensions of the models. Successful indoor models must minimize weight while retaining sufficient strength, and must balance the requirements of propulsion, model size, and the size of the flying site in order to obtain the greatest flight time.

The nature of the “game” when flying outdoors is to learn to read the signs of a passing thermal and launch the model at the right time to ride it for a long flight. It becomes a contest between nature and the individual like other outdoor sports such as fishing, sailing, or hunting, and it requires some of the same skills of observation, patience, and judgment.

Free Flight by Bob Hatschek
What’s Free Flight? A thrill, a challenge, a puzzle.
It’s other guys like you, the world around, striving for the same graceful beauty of flight.
It’s comradeship across all human barriers. It’s bull sessions through the wee hours.
It’s fierce competition with the highest of sportsmanship.
It’s a battle against nature … her perversity … her law of gravity.
“Free as a bird,” describes God’s most unchained creation. Man’s is a model airplane soaring birdlike in a thermal. You created it. Vicariously you soar with it with its freedom.
Free Flight is the mist of the dawning’s calm as you test.
It’s the noonday sun as your model thrusts for the heavens.
It’s the cool drink after a dusty chase.
It’s the piercing scream of a peaking engine … the silence of the glide.
It’s sunburn and poison ivy and weariness to the marrow … made worthwhile.
It’s skill in your fingers. It’s knowledge learned for the knowledge alone.
It’s perfection sought … never attainable. A goal everlasting.
Free Flight is all of these, yet much more!
I tell you this, and you may believe.
But, you cannot know unless you know.

The grace and beauty of models flying freely and without restraint is an important source of the enjoyment provided by free flight modeling. There is an air of magic and mystery in watching your own creation soar and rise, powered the sun and the wind. It is a source of satisfaction that never grows old. 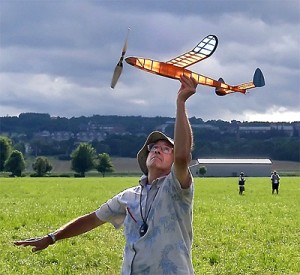 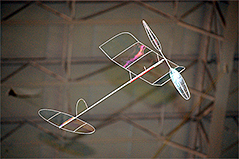 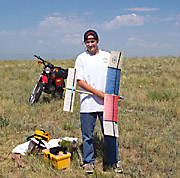