The Phoenix Model Airplane Club, with roots back to 1934, is dedicated to the support of all types of free flight modeling. This includes all AMA, FAI and Old Time events. Among our members, we have national record holders, international team participants, one World Champion, skilled model designers, and just plain folks that get a huge kick out of building and flying. We are chartered under the auspices of the Academy of Model Aeronautics (AMA). As such we are a welcoming club. Our sole criterion for membership is AMA membership.
If the thought of sending a model into the azure blue skies of Arizona is appealing to you, join us and start having some real fun.
Tom Gaylor, Club President 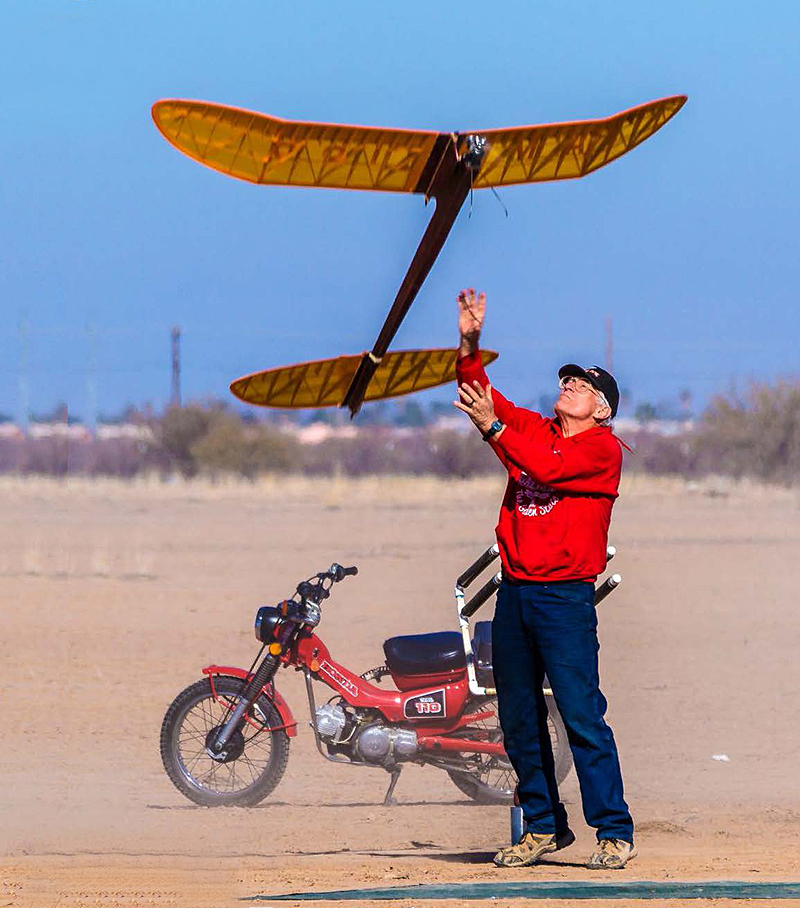 ABOUT the PHOENIX MODEL AIRPLANE CLUB

In 1934 Gaylord Webster started his hobby business with a capital investment of $2.52. This was in the form of balsa wood he kept in a box under his bed. The business was called Cacti Model Supplies. Later that year he started the Cacti Modelers Club. Gaylord’s business eventually became that of a hobby wholesaler.

Eventually the Cacti Modelers Club and a club known as the Copperclad Eagles merged into the Phoenix Model Airplane Club.

For decades Quentin Webster was instrumental in support and management of the club by providing guidance, a meeting spot, and a darn good hobby shop for modelers!

In the1930s, model flying took place at Sky Harbor Airport, a sleepy, grass field way east of town. Arch Harlan tells us that flying at Sky Harbor ended when someone crashed his gas model into a Doctor’s Stinson! After that, models were being flown in the area of 19th Avenue and Thomas Road, the future site of West High School, which was built in about 1949.

PMAC eventually acquired permission to use the Cactus Airport, at the corner of Cave Creek and Cactus, for a flying and contest site. This small airport served crop dusters and little else, but it boasted of a paved circle for control line flyers and a lot of space for free flighters. The first few Southwest Regional Model Airplane Championships, which is quite a lofty name for a beginning effort – and it is still used today, contest took place at Cactus in 1951. SW Regionals in those days had events for free flight, control line and radio control and the events were organized and sponsored by PMAC. Through the years, SW Regionals events evolved, with the constant element every year being free flight. After Cactus, PMAC club flying took place at 32″d St. and Cactus [now the site of a large subdivision, as is Cactus Airport]; Dynamite Blvd and Cave Creek [now the site of a veteran’s cemetery]; and 38th Avenue and Pinnacle Peak Road [now another subdivision].

Locations for SW Regionals include Cactus Airport, Luke Auxiliary Field #3 [NW of Phoenix], the Buckeye Airport, and most recently, two locations near Eloy, AZ. Eventually, the SW Regionals was taken over by a group called the Southwest Regionals Modelers Association, Inc. that represents the interests of all concerned modelers, although SWRMA is not directly connected with PMAC. Funding was obtained that will permit the SWR to continue indefinitely. Considering that 2004 marked the 54th annual SWR, chances are good that the contest can and will continue for many years.

In recognition of the years of service by the Websters, our flying site is known as Webster’s field, and we were fortunate to have Quintin and his wife Nancy at a recent SWR handing out the free flight awards. 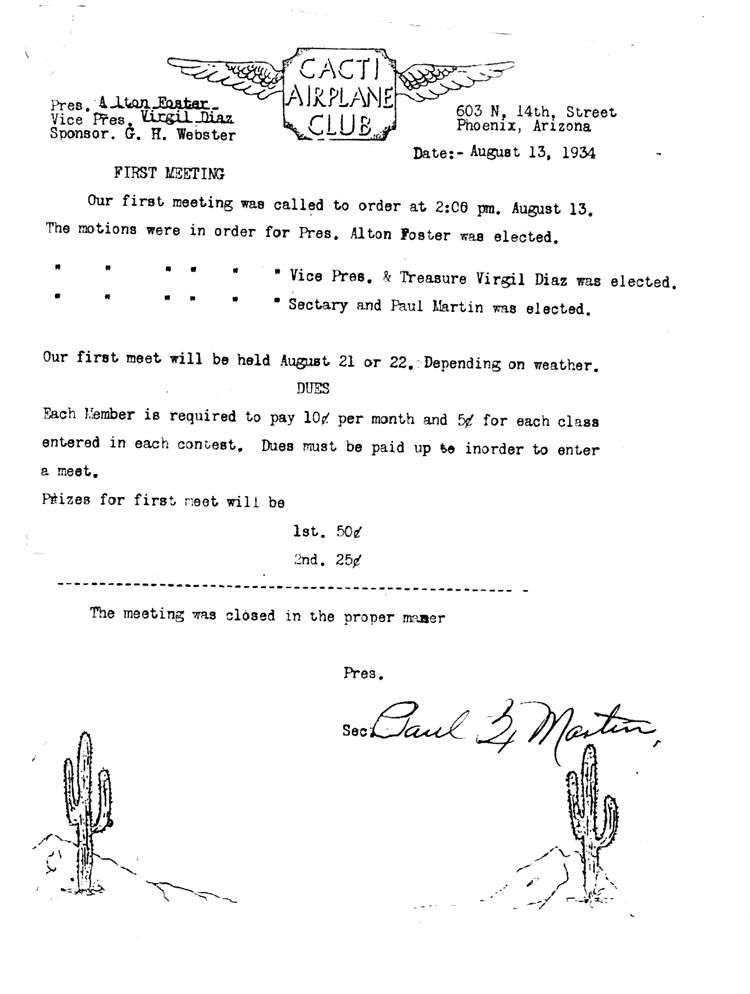